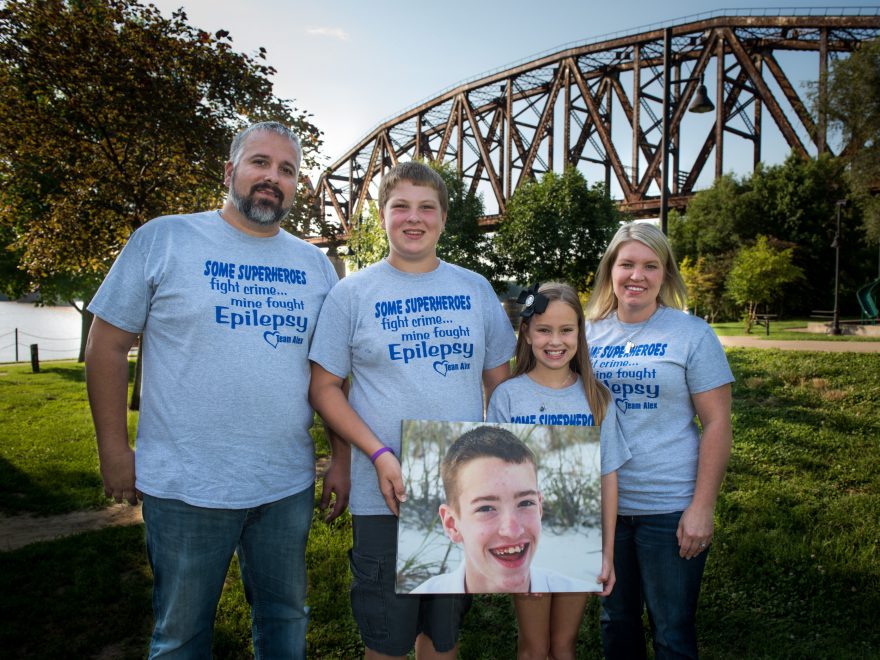 Paul, left, and Carrie Harpole, right, with their children Aiden, 14, and Ava, 10, with a portrait of their son Alex Harpole at Sunset Park in Henderson, Ky. Monday afternoon, July 11, 2016. Alex, who was 16 when he passed away on May 19th, loved to go to the beach and build sand castles. His portrait was taken at Clearwater Beach, Fla. when he was 15 years old.

Wearing a red clown nose to a funeral may seem completely inappropriate at first. But for anyone who knew Alex Harpole, it became the perfect way to remember Alex and celebrate his life.

“Alex was the type of kid who always tried to make people laugh,” says Alex’s mother, Carrie Shockley Harpole. Alex was a constant jokester full of silly antics. Two of his favorites were giving “wet willies” and twisting himself into a pretzel by tucking his feet behind his head and walking on his hands. But having a red clown nose at the ready was also another classic Alex act.

“Sometimes he’d be wearing one and have another one stuck in his pocket to give to someone else,” Carrie remembers. “That was just Alex.”

So, what better way to remember Alex than by pulling out some of his familiar antics at his memorial service?

Alex passed away from SUDEP (sudden, unexplained death of someone with epilepsy) on May 19 near the end of his freshman year at Henderson County High School. That week just happened to fall during Walgreen’s Red Nose Week (a nation-wide FUNraiser helping kids in need), so clown noses were easy to come by. The Harpoles ordered hundreds of them. Even Pastor Heath Farmer, who presided at the funeral service, gave the eulogy wearing a red clown nose for Alex.

The red noses were an easy decision for the Harpoles. Choosing pallbearers was a little tougher.

Everyone who ever met Alex felt close to him, and he had hundreds of friends and family because he never met a stranger.

But there was one group of guys that Alex had grown especially close to. From his first days at South Middle School, Alex befriended the day shift custodians. “Andy (Richmond) and Kirby (Moser) let him do what he truly wanted to do, which was to help people,” Carrie explained.

Eventually, Alex would help them mop, sweep, even take out the trash. Helping after school became his daily routine. Carrie says Alex saw it as his reward because it was something he looked forward to.

“That was Alex. Smiling at people. Hugging people. ‘What can I do to help?’ That was him,” Carrie explained.  “If only there was a little more of that attitude in the world.”

So when it came down to choosing pallbearers, Carrie and Paul Harpole decided to include Alex’s custodian friends at South. “What those two did for Alex meant a lot to us as parents, and we felt like Alex would be honored to have them carry him to his final resting place,” Carrie explained.

“I’ve been working for the school system for 17 years, but that was a first for me,” said Andy Richmond, Custodial Supervisor at SMS. “We were really shocked that they asked us, but we said immediately we would love to be a part of it.”

“We were honored to do it,” Kirby Moser added, echoing a sense of being “blown away” by the Harpoles’ request. “Being a custodian, you don’t think you make an impact on people. We like to be behind the scenes.”

But that’s the thing about Alex. He had a way of making people feel special. He is remembered by loved ones as a person who treated everyone the same, no matter who they were.

“During the funeral, the pastor asked people to share stories, and there was a guy who worked third shift at Kangaroo who had a story about Alex,” Andy recalled. “Everywhere he went, somebody had a story.”

“It’s amazing to see how many lives Alex has touched – both adults and kids. It really makes you proud as a parent,” Carrie said.

One student commented on Facebook, “Once I was having a bad day, but then I saw Alex in the hallway and he made me smile. I will always remember that.”

Alex’s legacy lives on in his contributions to epilepsy research as well. For at least the past three years, the Harpoles have participated in the Epilepsy Walk in Owensboro. This year, Alex’s friends and family carried on the tradition in his memory. Approximately 50 people gathered to carry a banner in his honor at the Epilepsy Walk in Owensboro on Saturday, June 11. Together, the group raised more than $1,800 for the Epilepsy Foundation of Kentuckiana by selling t-shirts and collecting donations.

On the national stage, Alex was the 2007 “Kids Speak Up, Speak Out” representative, where he got to meet Senator Mitch McConnell in Washington, DC and present his thoughts on including epilepsy in the Americans with Disabilities Act. Soon after, McConnell presented the bill to the floor, which was later passed.

From talking to friends and family for this article, it’s clear to see Alex had a huge impact in his short 16 years, and he changed the lives of many people. Carrie Harpole summed it up like this: “I always say he did it by showing love and treating everyone as equal.”

Paul Harpole says Alex was prone to giving hugs to anyone at any time. “It didn’t matter who you were; he would run right up to you and give you a hug. But it also didn’t matter where you were. We’d be in Walmart and he’d run up to people and hug them. Complete strangers, sometimes. It could almost be embarrassing, honestly. But there were many times when people would say ‘I really needed that.’ It was like he knew somehow,” Paul remembered.

By the way, Andy and Kirby, who laughed about their own multiple hug encounters with Alex over the years in this interview, still have their red noses from Alex’s funeral. “I keep mine up on a shelf in my office,” Andy said, with a hint of sentiment. “Right next to his picture.”

Kirby paused a second, reflecting. “We still talk about him. He’ll never be forgotten; that’s for sure.” 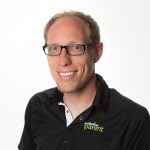 Danny is a regular contributor to Henderson Family, Owensboro Parent and Owensboro Living Magazines and is a staff writer at Tanner Publishing. He and his wife Kelly are raising two very active boys, 7 and 9.