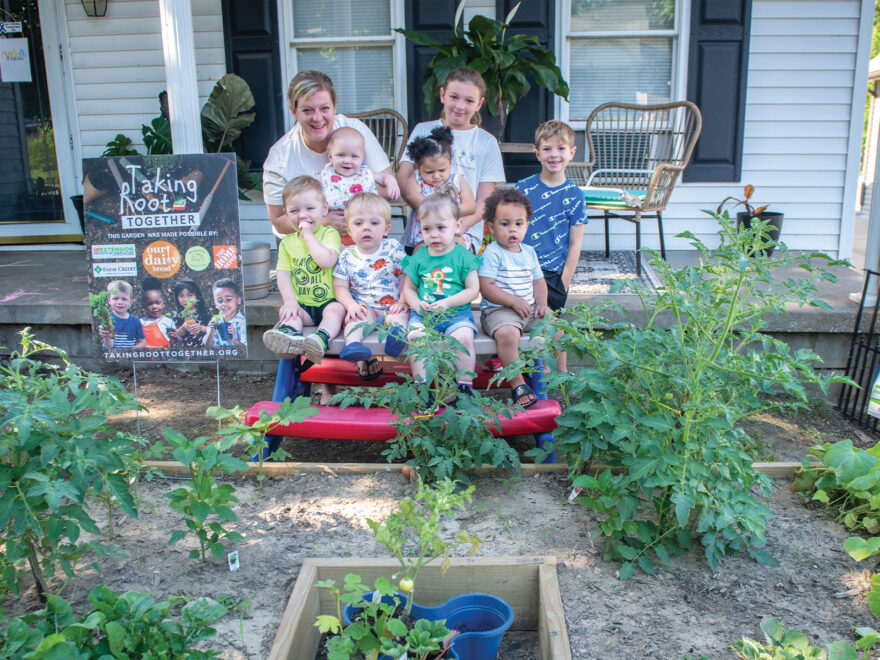 “In my capacity, I was born to serve. I found that as I’ve grown, sometimes serving is wearing different hats whatever that may be. I felt called to serve and that was going to be my purpose,” said Natasha McKinney, owner of 1st Kids Care.

Natasha is a Henderson native and a single mother to three biological children (ages 20, 10 and 6)  and one foster child (age 2). Before opening her licensed and certified in-home daycare center, she spent most of her adult life working in the food industry after going to culinary school. After receiving a medically complex foster child, she decided to leave her corporate job.

Owning her own daycare not only would provide her income, but it gave her the opportunity to help serve those in her community. It was important to her that her foster child be surrounded by peers. “I wanted her to be able to have interaction and connection. The kids are very receptive to her being special needs. I think it is good for them to experience someone who is different from them because it teaches them a lot,” said the proud mother and daycare owner.

A Day in the Life of 1st Kids Care 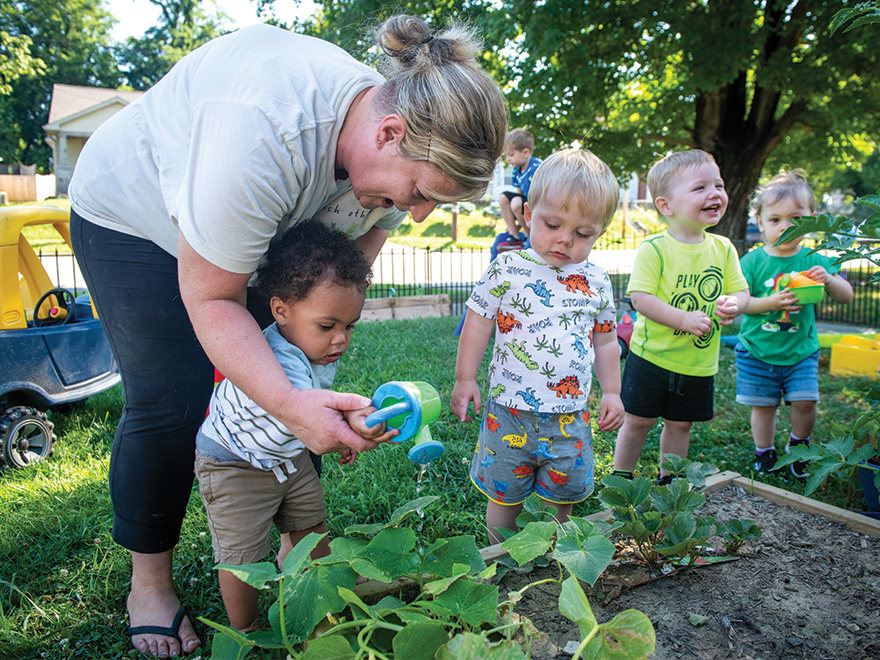 Natasha opened her daycare center in 2021. She currently has seven kids, including her foster daughter, she cares for ranging from three months to two years old. She explained how she loves what she does. “We really try to incorporate nature here.” She has to have a curriculum and lesson plans just as every other daycare center.

Natasha loves to learn and try new things. Recently, she signed up to receive a subscription box every month from another country. “We just got a box from Thailand. It had 12-15 different snacks in it,” she expressed. “Everything has been enjoyable. It is a great way to bring culture here, too!”

It is important to her for the children she cares for to have a creative and investigative atmosphere. “Yesterday, we were watering the herbs and there was a tiny baby frog. That sparked so much curiosity!  We can learn our colors outside by asking ‘Where is the blue sky?’ without being forced to sit inside at a table. Everyday is different. We go with the flow. I like that we have that flexibility to meet the children’s needs. I don’t set time limits on anything, unless they are into something before lunch and I’ll set a timer. We have a routine, and we have consistency. They know those cues of what to expect,” she explained.

The Benefits of Using a Food Program

After the first month of being a certified in-home daycare, Natasha signed up with a food program through Our Daily Bread. They serve Tennessee and Kentucky. It is a reimbursement program, in which you have to serve certain components throughout the day.

Each child has to have x amounts of fruits, x amounts of veggies, a whole grain each day, no more than two meatless options, etc. Natasha explained how she was very overwhelmed at first, but those who join are provided a trainer and support person who helps walk you through the process. They are a phone call or email away. Everything is done online through their program. At the end of the month, Natasha submits her menu. Her support person checks her menu to make sure it meets their qualifications. Once approved, she will purchase her menu items and they reimburse her, which is a blessing. She couldn’t express enough how it has been a Godsend program for her and her daycare center.

It has helped having a culinary background, too. She may have fettuccine alfredo on Monday but make a bigger batch and add chicken and broccoli to have again on Friday. She tries to get creative with eggs and will make a quiche and freeze it for later, too. “It doesn’t allow us to serve sugars and yogurts have to be low count. It is strict, but it guides them to make good nutritional choices and guides them to eat more fruits and vegetables.” 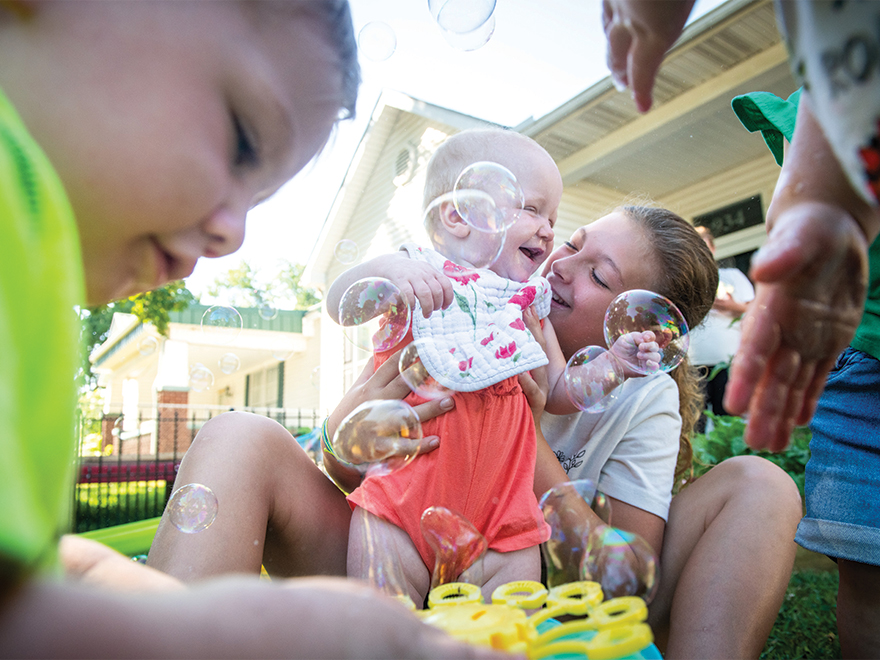 “Just to be chosen was an honor because with grants you never know how that is going to go in your favor,” said Natasha on being one of the recipients of Our Daily Bread’s Garden Grant.  “To know they were going to have an extra experience outside, it created so many creative opportunities for them!”

Natasha explained how the grant application itself was a very easy process. The terms you had to agree to were: (1) Have an outdoor space to hold a raised garden bed (2) Be able to maintain and take care of it daily (3) Take pictures and post and (4) Give back to the community. Any veggies or fruits they grow will be used in her center first, then donated to the children’s families and whatever extras they have will be given back to the community. “We are excited and ready to give back!” expressed the enthusiastic owner. “We are going to set up a table out front and put a sign up that says, ‘FREE’ with a garden sign.” The sign reads, “Taking Root. This garden was supported by our Daily Bread.”

The process of the materials being delivered and placed in her yard was amazing. “He came to my house, had the wood, built it in the front yard, shoveled and wheelbarrowed the soil in and then he brought in different seeds and vegetables and let me and the children pick out what we wanted.” She explained how it was hard to keep the kids out of the garden at first because the day it was built they were all outside and around it. However, she has encouraged them to only watch the garden with their little eyes and water it to help it grow. Everything they used is organic with no pesticides, and the kids have really enjoyed watching everything transform.“ They are really hands-on with watering. We tried to plant beans and strawberries. Those were things they could pick and eat right out there.” They also planted herbs and cucumbers from seeds. Natasha loves how this is a sensory experience for them, too!

Before the garden bed was built, Natasha and the kids started a little early by planting some herbs inside. She explained how they are very curious with everything that grows. She even made an indoor compost bin. If they have any scraps, they know they can throw them in there. “I hope as they start to grow older and mature, that they learn what is inside now goes outside and what was growing outside now goes inside.” She is hoping at some point they can make some kind of bread and incorporate some grain and mash it up to make flour. The possibilities are endless.

“My family was farmers. I grew up in the country and always said I would never live in the country again because I like to have my pizza delivered,” chuckled Natasha. “But, it is a little bit of the country here. It teaches them to be sustainable. We can save rain water to water our plants. We can grow vegetables that feed our family. So many of us weren’t taught that or don’t know how to do it or don’t know where to start. It gave the children a place to start,” said the joyful caregiver.

She feels like she is taking part of her childhood and recreating that within her daycare center. “It’s been very encouraging for them and investigative because they are very curious. They look in amazement at ‘I did that.’ They don’t understand the full circle concept yet, but they will.” Although Natasha grew up on a farm and worked most of her life in the culinary world, this is her first time having a garden of this size herself, so it’s been really exciting for her, too.

Natasha loves what she does. “I’m thankful that I am here. I still obviously could serve a lot more if the opportunity arose. I am trying to expand, but I have to find some commercial property.” If she were to expand, she would hire staff. Her goal would be to have a small center with around 25 kids. She is currently enrolled in a course through the community college that will allow her to be a director of her own center if those doors open up for her.

Everyday is an adventure for Natasha and the children she feels so blessed to care for each day. Usually during morning arrival, they have free play during the mornings until 8am for breakfast. They may play with gross motor toys or sensory bins. After breakfast, they go outside. “We live outside when we can. We sing songs, read books and blow bubbles.” They do yoga or counting songs on TV, but they rarely have the TV on. She chuckled and said maybe during nap time she might sit but other than that she is engaged with them as much as she can be. The opportunities for learning are endless. “Anything you make exciting, they will enjoy to learn!” 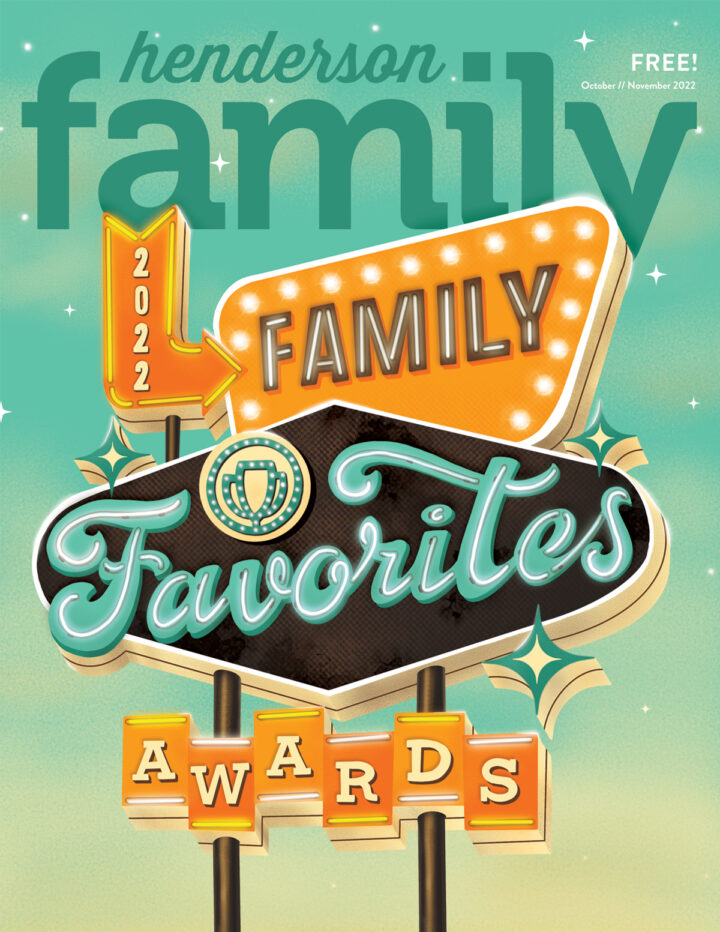